An Inconvenient Truth explores the human impact on climate change, what we can do to solve the problem, as well as what will happen if we don't. This 2006 documentary follows Al Gore as he campaigns to raise public awareness of global warming, its impacts, and the urgency of the problem.


A global warning. That subtitle very accurately sums up my general thoughts on this film.


Climate Rati... oh... I should probably go into a little more detail... fine.


In all seriousness, this film is truly a global warning. It was in 2006, and it is today. Former US Presidential Candidate Al Gore had a lot of passion for an issue that was less widely accepted by the public than it is today, and that passion was on full display in this film, which follows Al Gore's speaking tour to raise public awareness of global warming and its impacts. Gore is a phenomenal speaker, keeping the audience in the room and at home entertained, and providing great insights and humor while presenting a heavy subject.


There is a nice balance between reviewing the state of the world at the time and projections of a future where no climate action has been taken. Gore's presentation of the climate crisis is exceptional, presenting the information and impacts while maintaining a positive outlook. Considering how climate doomerism is just as harmful as climate denialism, this approach allows Gore to present the information from a hopeful standpoint while still expressing the urgency of the matter.


This film is very interesting to watch considering what we know now in 2022. Gore was ahead of his time, supporting his statements with scientific evidence and crediting those responsible for his information. Considering the lengths politicians and corporations will go to trying to discredit scientists, Gore's willingness to credit them shows the general public that scientists should be trusted, and the information that comes from the peer review process is credible.


The information presented in the film, although outdated, is accurate and important. By important, I mean that it needed to be said at the time, and it needed to be said by someone that people would listen to. When Gore ran for President of the United States he ran on a very progressive platform, with strong support of gay rights, separation of church and state, affordable education and childcare, accessible healthcare, and environmental protection. Gore won the popular vote but was not elected President as he did not secure enough electoral votes. Although this meant that his ideas would not be implemented by the government, it made him a great spokesman for this issue, since he had support from a large portion of the public. The details of his message will be covered in the next section, where the information he provided in 2006 will be compared to information we have in 2022.


Overall, I think that even in 2022 everyone should watch this film. The information is outdated a bit, but it still provides great insights and valuable information on the climate crisis.


Climate Rating: 4/5. The only reason this isn't rated higher is due to the information being a bit older, and the accessibility of TED Talks similar to this.


An Inconvenient Truth focuses on the world at the time and creates a very nice snapshot of the status of the climate crisis in 2006. After 15 years, I figured it would be interesting to review the facts and figures Gore provided and see how they have progressed.


To start, I want to paint a picture of the world at the time, using the information provided in the film.


A hot topic - literally - has always been record setting temperatures, and how each year fits into that temperature record. At the time Gore put his data together, the top 10 hottest years were 10 out of the most recent 14 years. Continuing the trend of hot temperatures, New Delhi, India had set a record with a day of 122 degrees Fahrenheit in 1992. Increased temperatures also have an impact on ice and snow across the world, and the rate at which they melt. Gore mentioned a few places in particular: Kilimanjaro, Glacier National Park, Greenland, and the Arctic Ice Caps. There was also a record number of typhoons in Japan, and tornadoes in the US in 2004. In addition to records, there were also a number of figures and images that Gore shared that I believe would be interesting to review more than 15 years later.


One of the more interesting figures Gore mentioned was regarding the nesting patterns of birds. He mentioned that migrating birds would arrive to nest around April 25th most years, and then the birds would begin hatching in early June. However, closer to the release of the film, birds were beginning to hatch in late May due to changes in the climate impacting their prey. He also goes into carbon emissions and contributions to climate change from different sources. One figure he provides is that 30% of all CO2 in the atmosphere is from forests burning. He also provides a distorted map showing which countries have contributed most to climate change (shown below), the US being the leader. Finally, Gore mentions the average annual temperature at the time - 58 degrees Fahrenheit. Let's see how these records, facts, and figures have changed since then. 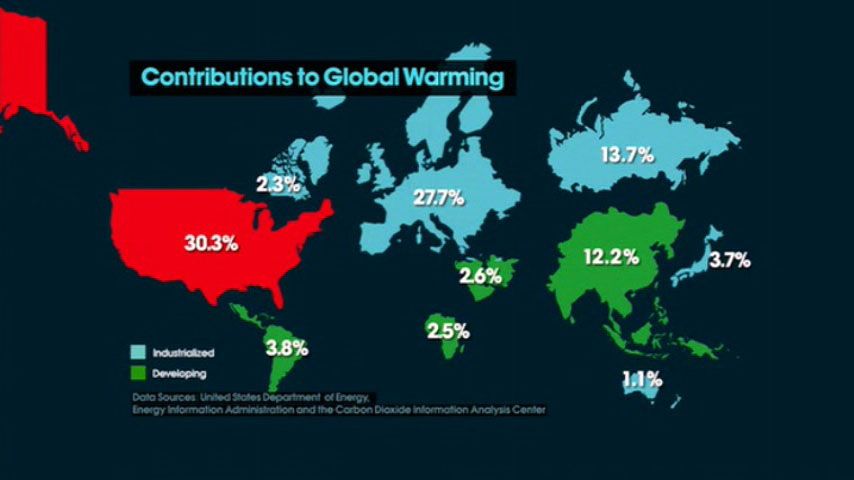 
All of this information does raise a question: has anything changed since then? Short answer - yes.


Of the 10 years that were the hottest on record when the film was released, none of them have retained their place in the top 10. The top 10 hottest years on record have all come since 2010[2]. New Delhi has not experienced a day hotter than the 122 degrees measured back in 1992, however, the country experienced its hottest day on record in 2016, measuring 51 degrees Celcius or 123.8 degrees Farenheit[3]. These increased temperatures have led to an increased rate of melting in the ice sheets around the world. Gore mentioned that at our 2006 pace we would lose the ice on Mt. Kilimanjaro in the future, and we are starting to approach that point. Of the ice still present in 200, almost 40% had disappeared by 2011[4], and in 2013 it was estimated that all of the ice would be gone by 2060 if our current rate of global warming were to continue[5]. Gore also mentions that at some point visiting Glacier National Park will be impossible, as no glaciers will remain. The United States Geological Survey tracks the status of the glaciers in the park, and their estimates and models predict that the glaciers could be completely gone by 2100 if greenhouse gas emissions are not mitigated[6]. The story of Greenland's ice sheet is similar to that of Kilimanjaro and Glacier National Park. Greenland's ice sheet has lost mass for the 25th year in a row[7], adding large amounts of freshwater to the ocean and contributing to an increased rate of sea-level rise. In the Arctic, September of 2006 had a minimum of 5.77 million square miles of ice, while September of 2021 had 4.72 million square miles, a rate of loss at 13% per decade[8].


Although Japan has not seen more typhoons making landfall than the record 10 back in 2004, the ones that have made landfall have become more intense and severe. 2019 proved to have the most costly of these, with Super Typhoon Hagibis causing $17 Billion worth of damage[9], and killing at least 86 according to an NHK article at the time of the Typhoon[10] although the Wikipedia Page for Hagibis lists the death toll at 98[11]. 2020 even saw a joint virtual conference to discuss the increasing frequency and ferocity of typhoons in the region. In the US, 2004 still holds the record for the highest volume of tornadoes, but similar to Japan we are seeing an increase in the damage caused by these tornadoes. 2011 saw 553 fatalities from tornadoes in the US, surpassing the previous record of 519 back in 1953[12].


The migration patterns of birds have continued to change as well, with a 2019 study suggesting that rising temperatures are leading to birds migrating slightly earlier each year, adjusting migratory patterns by about 2 days each decade[13]. This is a gradual change, but it makes a difference over time. If Gore's data showed birds nesting around April 25th, which was early at the time, it is likely that they are now nesting around April 23rd. Gore's comment about emissions from forests burnings interested me since there have been more wildfires than ever before over the past few years, and ever since I moved to Colorado I have experienced this increased frequency first-hand. I didn't know if the proportion of emissions from these would be different since our overall emissions have increased over time as well. Unfortunately, the issue has escalated to the point where scientists are worried that areas with dense vegetation are emitting more CO2 than they absorb due to fires, with even the Amazon Rainforest now emitting more CO2 than it is absorbing[14]. The overall percentage of emissions from forests may be the same, but the Amazon no longer being the carbon sink that it always has been could be more harmful than the emissions that it is releasing.


Global emissions balances have changed as well, with Asia now equalling the cumulative global emissions of North America, as shown by an updated version of the emissions map shown below. The United States has still contributed the most CO2 historically, but it is no longer the annual leader in CO2 emissions, with China taking that title. The global average temperature was 58.84 degrees Fahrenheit in 2020, almost a full degree higher than it was when the film was released[15]. As our emissions rise and our forests burn, our temperatures will continue to rise. Will we listen to Gore's warning and take action to address the climate crisis, or will we continue prioritizing short-term profits over long-term solutions?


An Inconvenient Truth is one of the more concerning environmental documentaries that I have seen, considering its urgent tone regarding climate change and the fact that the information it presents is over 15 years old at this point. Watching this in 2006 would have made me nervous for the future, and I know that I would have wanted to ensure that steps were taken as soon as possible to work towards a more sustainable future. Over 15 years later, I am even more concerned. The world that Al Gore was mentioning as "the future" is here today, and the urgency of the matter has increased exponentially. As Gore said, it may take time to connect the dots, but there may come a day of reckoning when we wish we would have connected the dots sooner. That day of reckoning is getting closer every day, and the sooner we can connect the dots, the less likely we are to lose what is most precious to us. That which we take for granted may not be here for the next generations if we aren't able to connect those dots. There is already An Inconvenient Sequel, let's not allow it to become an entire franchise. Let's take action to ensure that what we take for granted IS here for future generations, and avoid an inconvenient future.